The Benefits and Uses of Infrared (IR) Thermography

The Benefits and Uses of Infrared (IR) Thermography

There are few instruments that can provide as much information in a short amount of time as the infrared camera. The IR camera offers a look at how heat energy is moving within a system by showing infrared radiation not visible to the human eye. Infrared thermography (conducted using an IR camera) is the method of detecting infrared radiation (heat energy) emitted from an object, converting that to a temperature, and displaying that information as an image. This can be used to find air or water leaks in buildings or to discover a loose electrical connection that will eventually fail.  From photovoltaic arrays to roof systems, the IR camera is one of the most important tools available to commissioning agents. More important than the tool, however, is the interpretation of the information being received and how it is translated into actionable information.

A little knowledge can be a dangerous thing and, indeed, that holds true with regard to IR thermography. Without the proper training and experience, it’s hard to distinguish what requires further evaluation and what can be ruled out as inconsequential. For example, infrared radiation will reflect off of many surfaces, which makes knowledge of these surfaces and where you view an object from very important. Standing perpendicular to such an object being analyzed can create an inaccurate thermal image because the infrared radiation from the body of the person holding the camera will be reflected by the object being imaged. Often, moving to an angle slightly off of perpendicular (so as not to be directly in front of the object) will provide a more accurate image. It’s for this reason that the ideal viewing angle is between 5° and 60° (where perpendicular is 0°). This example is one of many and serves to illustrate that the foundational element of IR thermography is training, experience, and knowledge. In fact, most of the time spent on IR thermography is on the analysis of the images, rather than on than the inspection itself. In this article, we’ll examine some of the ways in which systems can be improved, diagnosed, or maintained using infrared thermography.

Every building relies on electricity to power various systems necessary for normal operation. Excessive heat in electrical systems (components or the connections between components) can be an indicator of an issue that will continue to get worse until it eventually fails. Finding these issues early on prevents failures and keeps everything functioning normally and safely. For these reasons, electrical systems are a great candidate for IR scanning. Perhaps most importantly, it’s a non-contact way to evaluate electrical systems which makes it much safer than any hands-on method. To evaluate electrical panels, the thermographer (with the IR camera) will walk with the electrician, who will be removing panels to expose the live components. Once the panels are removed, the thermographer will scan each panel looking for temperature abnormalities in cables, connectors, breakers, etc. An image will be taken to document the issue, which can be fixed during the evaluation or after, depending on the owner’s preference and time needed to perform the repair.

Some larger facilities, like hospitals or universities, utilize a central steam plant. To keep steam plants running efficiently, steam traps must be regularly checked to ensure proper operation. A steam trap is a mechanical device that removes non-condensable gases and condensate from the system. A steam trap that fails closed will trap condensate within the system that will affect the amount of heat transfer upstream of the trap. A steam trap that fails open will vent steam through the system, causing a significant loss of energy and reduced efficiency. A faulty steam trap won’t show any problems that can be identified through regular visual inspection. With IR thermography, however, the thermographer is able to “see” inside of the device to identify any irregularities. 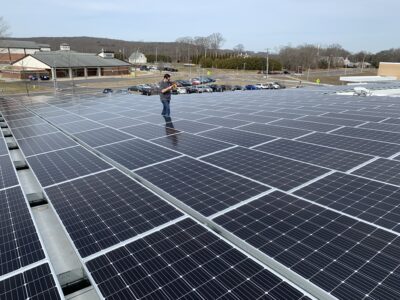 Photovoltaic (PV) systems (solar panels) are an increasingly popular option for generating electricity for both residential and commercial owners. Because the investment in PV systems can be large and the payback can take many years, the most effective way to ensure return on investment is to periodically inspect the entire system using infrared thermography. Imagine a PV array containing hundreds of panels installed on a roof or in a field. Then imagine how many electrical connections exist to tie all those panels together, which then send power through an inverter (to convert DC power to AC). Any one cell could be faulty or one connection could be loose, corroded, or faulty which creates not only inefficiency, but loss of power production. Further, within each solar panel there are cells which comprise the panel itself. Any one of these cells can be defective due to damage sustained during shipping, manufacturing, or installation. A damaged cell will consume electricity, rather than produce it, by creating heat. Heat in electrical circuits is created by resistance (think: heating element on a stove or a lightbulb filament), and resistance reduces the flow of electricity, thus resulting in power loss. Even worse, an affected cell has the potential to produce enough heat to damage other cells, compounding the problem. It’s for this reason that IR thermography of PV systems is important during installation, annually thereafter, to identify and resolve problems. 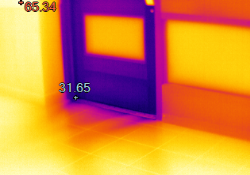 This image shows air infiltration due to the building operating under a negative pressure. A building of this type/use should be neutral or slightly positive in relation to the exterior.

One of the most expansive uses of infrared thermography is identifying issues with the building envelope. From the roof to interior or exterior walls, IR thermography offers an opportunity to “see” inside walls and beneath roofing systems. Without infrared thermography, the task of identifying drafts, cold spots, or other comfort issues would consume vast amounts of time and require destructive investigations to accurately diagnose problems. With IR thermography, however, the thermographer can “see” inside walls and beneath roofing systems to quickly and effectively identify issues. Such issues range from missing insulation in a wall cavity to improperly installed window flashing or water collecting under a roof membrane. To demonstrate this, imagine a facility that has a cold room which has been leading to occupant complaints, and the cause must be identified. Where would you start? The first step would be to speak with occupants about the nature of this issue, followed by visiting the space. Once in the space, you may check each diffuser to ensure the room is being heated properly. Next, you may walk around the space, relying on your senses alone to try and determine the cause. Finally, you may be able to identify a cold section on the wall and you suspect that there may be missing insulation. Do you then open cut into the wall, knowing that this will require time and money to repair, even though it may not be the actual cause of this particular issue? It’s a very tough position to be in. However, with an IR camera, you can walk through the room looking at all areas and actually “see” how the heat is distributed throughout the room. Using an IR camera to look at that same section of wall that was previously suspected, a thermographer can analyze the image and determine that there is missing insulation in the bays surrounding the window as well as air infiltration coming from the bottom of the window, indicating an improperly installed window. At this point, the problem is clearly identified, and it is determined which contractors to call and how this problem can be fixed. Most importantly, there is the confidence of knowing, before you open a wall, exactly where the problem is.

From proactively identifying imminent failures in electrical systems to diagnosing “invisible” system or component failures after the fact in mechanical or building envelopes, it is clear how IR thermography, combined with proper knowledge and analysis, can be employed as an effective tool to identify and address a variety of issues relating to building systems performance. 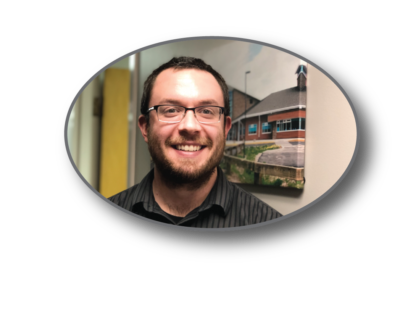